Agario Unblocked is a massively multiplayer top-down strategy browser game created by Matheus Valadares (also known as Zeach) that is based on the actual jelly-like substance agar. In agar.io, the player manipulates a circular cell using the mouse and keyboard buttons.

The goal of the game is to become the biggest cell in the arena (also known as map). To do so, the player has to eat smaller cells and pellets while trying to avoid larger cells. Originally, a browser game, agar.io entered Steam Greenlight and was subsequently “Greenlit” by the community, with the developers indicating that they planned to add more features not available in the web version of the game.

The objective of agar.io is to grow a cell on a Petri dish by swallowing both randomly generated pellets (agar), which slightly increases a cell’s mass, and smaller cells, without being swallowed by even larger cells. The browser version currently holds five game modes: FFA (Free-For-All), Battle Royale, Teams, Experimental and Party.The mobile version of the game includes FFA (Free-For-All), Rush Mode, and Battle Royale.

The goal of the game is to obtain the largest cell; players must restart from a small cell when all their cells are eaten by larger players or fountain viruses. Players can change their cell’s appearance with predefined words, phrases, symbols, or skins. The more mass a cell has, the slower it will move. Cells will gradually lose a small amount of mass over time.

Can you make a agario private server?

Miniclip have not only enabled the ability for players to make their own servers again but they have also improved the official servers‘ bot protection.

Is agario full of Bots?

With a game as popular as Agar.io, it is no surprise that bots have been made. The bots designed for Agar.io have threat detection algorithms while, surprisingly, not considered cheating. They are very easy to detect, you can detect a bot by looking at the way it moves.

On which platform is agario available?

Can i play agario. Unblocked?

Use your mouse to play. Press W to eject mass, and spacebar to split yourself. 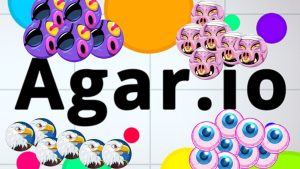 agario Unblocked is a massively multiplayer strategy browser game created by Matheus Valadares that is based on the actual jelly-like substance agar.