Cadillacs and Dinosaurs, released in Japan as Cadillacs Kyouryuu Shinseiki is an arcade game developed and published by Capcom. Released in April 1993, it is a side-scrolling beat ’em up based on the American comic book series Xenozoic Tales. The game was produced as a tie-in to the short-lived Cadillacs and Dinosaurs animated series which was aired during the same year the game was released. The game has to date never been ported to any consoles.

Up to three players can play at once, guiding their selected characters through eight stages, battling various enemies and bosses. There are four playable characters, each with their own strengths and weaknesses: Jack (balanced type), Hannah (skill type), Mustapha (speed type), and Mess (power type). The game’s titular dinosaurs make appearances as neutral characters that may attack both player characters and enemies.

In Cadillacs and Dinosaurs, the player has access to several attacks. Each character has two special moves including one that depletes a character’s health upon contact with an enemy and when two or more players play together, they can trigger a team-attack. Players can also find and use various firearms, throwing weapons such as rocks and explosives, and melee weapons such as clubs.

When was Cadillacs and Dinosaurs released?

Which characters are on Cadillacs and Dinosaurs?

Jack Tenrec – “A hot-blooded man who loves (the) nature. He is a leader of the team and loves Cadillac. His sliding attack is very powerful“.

Hannah Dundee – “A genius scientist and a cool head. Her fighting style is that of a man and she has an iron will. She is proficient in using items and is a high jumper. She also mastered a triangular jump“.

Mustapha Cairo – “A skilled engineer. He has a sense of humor and is very agile as a panther. The enemies hardly keep up with his incredible speed.“

Mess O’Bradovich – “A gentle giant. Once he gets angry, he cannot be stopped!! He has the greatest strength of all. His flying lariat is a sure threat to poachers“.

Vice Terhune – First boss the player fights. He attempts to ambush the heroes at a building but fails. Vice then tries to skin a Rock Hopper before being subdued..

Inset Coin: Shift
Start: Enter
Move: Arrow Keys
Action: Z, X, A, S, Q, E
It is also possible to play with a gamepad
Up to 4 players are supported 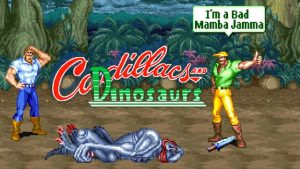 Cadillacs and Dinosaurs, released in Japan as Cadillacs Kyouryuu Shinseiki is an arcade game developed and published by Capcom.