Checkers Online is a HTML5 Board Game. Enjoy this stylish version of the classic Checkers Online Game. 3 Game’s Mode: – Multiplayer mode – Play against the pc – Challenge a friend playing on the same device. Play Checkers Multiplayer today and test your board game skills!

If you enjoy board games then you will enjoy this Checkers Online game. The aim of this online game remains the same – to take the opponent pieces and to eliminate them from the board. You can play several different game modes including 1on1 vs. an AI, or online against players from around the world.

The space on the other side of the opponent’s checker must be open. Multiple checkers can be captured if jumped consecutively with the same checker.

If a checker makes it to the other side of the board, it is kinged. To king a checker, another checker is placed on top of it. A kinged checker can move forward or backward on the board.

The first player to capture all the opponent’s checkers wins. If a player is unable to make a move, he/she loses the game.

When was the first checkers invented?

Historians now believe that the oldest form of checkers was played around 3,000 B.C.E. It was found by archeologists in an ancient city called Ur in Iraq. Those who have studied the history of checkers have also found a game called Alquerque. It was played in ancient Egypt as far back as 1,400 B.C.E.

What equipment do you need for checkers?

Two Players
One checker board
12 pieces for each player

How to Set-Up Checkers?

Each player places their pieces on the 12dark squares in the first three rows closest to him or her.
Each of these three rows should have a total of 4 checkers.
The row closest to each player is called the “KingRow”.

• Always move your checker diagonally forward, toward your opponent’s side of
the gameboard).

• Move your checker one space diagonally, to an open adjacent square; or jump one or more
checkers diagonally to an open square adjacent to the checker you jumped. When you
jump over an opponent’s checker, you capture it (see Capturing an Opponent’s Checker). 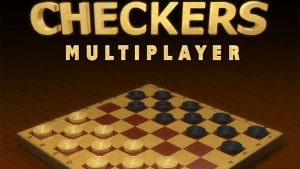