Death Chase Unblocked is an intense car racing game in which you must compete against other drivers in a race to the death. This race involves a huge amount of death and destruction and dangerous obstacles to bypass. Before you start racing, you can choose your vehicle and upgrade its various components such as its armor, weapons and engine. Each time you complete a race you earn additional coins that you can spend on improvements and upgrades.

The races themselves are fast paced and immense fun – you encounter a range of different ramps, loops, slides, obstacles and bridges. When jumping off ramps you can perform flips for additional points. These points build up your nitro bar and when it is full you receive a short speed burst. Be careful when driving as you can only sustain a certain amount of damage before your vehicle is destroyed! Can you conquer the Death Chase and create a super vehicle of destruction?

Will you make it to the finish lines of each one of these totally insane tracks? These death matches aren’t for the faint of heart! You’ll be racing through loops and pounding through walls while you compete against your opponents in this outrageous racing game. Just be sure to collect coins while you drive so you can buy upgrades between events.

Who has develop death chase?

by GameTornado, who have previously developed Lethal Race 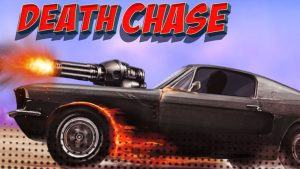 Death Chase Game is an intense car racing game in which you must compete against other drivers in a race to the death.