Elevator Action Returns, also known as Elevator Action II, is a 1994 run and gun arcade game developed and published by Taito. It is the sequel to Elevator Action (1983), featuring a much more gritty and realistic setting. Returns retains the elevator-based gimmick from the original, but expands the gameplay system and replaces the spy motif with a new scenario involving a paramilitary team fighting against a terrorist group.

The mostly well-received game was ported to the Sega Saturn and released as a Japan-only title named Elevator Action Returns in 1997, and later included in Taito Legends 2 compilation release for the PlayStation 2, Windows, and Xbox in 2006.

The player can choose from the following three characters when starting the game: 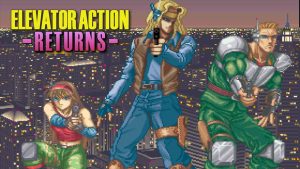