Fireboy and Watergirl Unblocked is a flash game series created by Oslo Albet. You play as Fireboy and Watergirl and explore various temples while solving puzzles and collecting diamonds. The game can be played with two players locally on the same device. There are currently 5 games in the series which are the Forest Temple, Light Temple, Ice Temple, Crystal Temple, and Elements.

A challenging aspect of Fireboy and Watergirl 1 is that you have to control the movement of BOTH characters at the same time. You can try to do this on your own, or you can play with a friend!

Certain areas of each level can only be bypassed by one of the characters and you must flip switches and perform certain actions to allow both characters to progress.

During each level, you must collect different crystals and complete the puzzles in as quick a time as possible. With a host of interesting levels, fun gameplay, and cute graphics, this game is great fun and a fantastic platform title!

How to play with the fire and water characters

Players must control both Fireboy and Watergirl using the arrow keys. The left and right keys control one character, whilst the A and D keys control the other. Due to the dual controls, this is also an amazing two-player game.

Each of the 30+ levels has a different set of challenges. Players must think hard about the order in which they move Fireboy and Wategirl as they explore the light temple levels. Fireboy, for example, cannot walk over the blue water pools.

There are 32 levels, consisting of 17 normal levels, 6 simultaneous designed levels, and 9 green diamond levels. In a normal level there will be various puzzles to solve, such as levers, pushers, boxes, etc. and a few diamonds to collect, though not necessary to complete the level, it will increase your rating at the end. In simultaneous designed levels, both characters should be moved at the same time symmetrically. Usually, there are not many puzzles and only obstacles. In a green diamond level there is only one diamond that must be collected in order to pass the level, pretty much the same as a normal level but with only one diamond which is needed to complete the level.

How do you play Watergirl and fireboy?

Use the keyboard to move Fireboy and Watergirl through the maze and collect the diamonds on their way to the exits. The A,W,D keys move Watergirl and the arrow keys move Fireboy.

Is there a Fireboy and Watergirl 6?

Fireboy and Watergirl 6 is similar to the classic game only the characters look a bit different. The game animation is not as smooth as the original but it is still fun to play.

How to Play Fireboy and Watergirl Unblocked?

1. Download and install a VPS app to your choice.
2. Connect using the VPN.
3. Start playing Fireboy and Watergirl Unblocked

What are the controls? 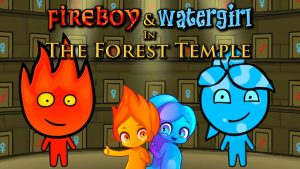