Players control a black hole moving around an urban area. By consuming various objects, holes will increase in size, allowing players to consume larger objects as well as smaller players.

Critics praised the game when it debuted, and it took the top spot in the free apps section on the App Store and on Google Play. Some critics however, characterized the game as a clone of the 2018 independent game Donut County. It has also been criticized for being promoted as a multiplayer game when in fact the other “players” are computer controlled NPCs.

Hole io Unblocked combines several gameplay mechanics. In Classic mode, the player’s objective is to become the largest black hole by the end of a two minute round by travelling around the area and consuming trees, humans, cars and other objects which fall into the black hole if appropriately sized. Gradually the hole becomes larger and capable of sucking in buildings and smaller black holes.

If an object is too big it will not fall in and might block the way preventing other objects from going through. Players need to utilize the game’s real time physics to their advantage and optimize their path for effective growth. Other black holes can consume the player’s hole resulting in “death” and respawning several seconds later.

“Battle” mode is a battle royale mode that pits the player against multiple opponents with the goal of being the last hole standing. While players can still consume the environment, the goal is to eliminate all other holes.

Both Classic and “Battle” mode are not played against players, but rather computers. Additionally, a solo mode exists which allows players to play alone with the goal of consuming as close to 100% of the city within two minutes. The simple mechanics of the game put it in the hyper-casual genre.

Players are awarded points at the end of each round that count toward their level. Each level unlocks new skins to customize the hole’s appearance. Other skins can also be unlocked by performing certain tasks within the game.

In this rather unique combination of arcade and puzzle there are lots of little things you can do to outsmart the competition and best every single one of your opponents. Here’s a basic list of effective moves and helpful tips.

Since the main mechanic is physics-based it is important to adjust your movement when trying to consume an object. Let’s say you want to eat some traffic lights: sometimes sliding under a vertical pole makes it fall in an unwanted direction and ultimately drop flat on the floor horizontally, thus preventing you from being able to eat it. To prevent that from happening you might want to slow down just a bit or move slightly backwards once the pole start moving in an unwanted direction.

It is possible to get larger objects and buildings fall in even if your hole is not big enough: simply place yourself under one of the edges of the object for it to start leaning into the singularity and then move slowly towards its other end gradually consuming the rest.

It may be more important to swallow more smaller stuff than fewer big structures. It is common to feel inclined to try and consume huge buildings once the hole gets big enough, however it is a bit of a risk because it’s possible to underestimate the size of an object. If it won’t fit inside, you will end up wasting your time. Instead spend some time adjusting to your new size by going for smaller prey.

If you have been having trouble making it to the top of the score board and besting other players, these tips will hopefully help you overcome some of the major difficulties. Ultimately, we tend to produce best results after entering that focused meditative flow state of mind, but you need to become really comfortable and familiar with the game in order to achieve it. Good luck becoming the best at Hole.io!

Soon after its release, Hole io Unblocked made it to the top of the free games section on the Apps Store and Google Play, receiving over 10 million downloads on Google Play alone.

While some reviewers criticized it for copying core mechanics of Donut County, others characterized the game as being “oddly satisfying and addictive”.

When was hole io released?

On which platform is hole io available?

What features does hole io Unblocked have?

Can i play hole io Unblocked?

What is the biggest size in hole Io?

Probably enough to make you proud, but here’s the thing: the world record for this game is 2354 points.

Do you play against bots in hole Io?

If you are into online gaming you are probably familiar with the concept of bots – ‘fake’ enemies controlled by artificial intelligence that can take place of your opponents instead of real people. So you might be wondering: are there any bots for hole.io? The answer is no, because you don’t need any – it’s as simple as that!

This black hole simulator was created with multiplayer in mind from the very beginning. The rounds are short, so it’s OK if you don’t make it to the top right away. Practice by competing against actual people, lose some games, learn from your mistake and gain that priceless experience to become the best!

The gameplay is very easy to get into: all you need to do is move the hole around and let various objects drop into it and disappear into the unknown. The trick is to only go under the objects that can fit inside: start with consuming pedestrians, poles and bushes, move on to cars and ultimately to large buildings. You can also eat other black holes if they are smaller than you.

The game takes place in a city area, so the map is comprised of office buildings, apartment complexes, parking lots, roads parks and many other areas usually associated with urban environment. The surroundings are instantly familiar to anyone who has ever seen a big city, so they are pretty easy to navigate. The best game strategy is to plan your way around the areas in advance: think of the most efficient route that will give you enough smaller objects in the beginning and will eventually introduce something bigger and bigger to chew on.

Each round only takes a couple of minutes, so don’t get discouraged if you don’t win right away: once you’ve familiarized yourself with the level and the mechanics you will become the master of Hole.io in no-time! 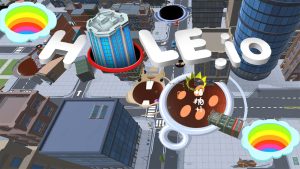