KOF ’98 was ported to the Neo-Geo CD in 1998 and for the PlayStation in Japan in 1999. A Dreamcast version titled The King of Fighters: Dream Match 1999 was released in 1999, featuring backgrounds remade in 3D. The game was also remade for the PlayStation 2 as The King of Fighters ’98: Ultimate Match, which expands the number of playable characters, further tweaks the gameplay and features a third fighting style option.

The gameplay does not differ much from the previous game, KOF ’97. Like in KOF ’97, the player has a choice between two playing styles: Advance and Extra, with a few slight modifications to Advanced mode (unlike in KOF ’97, the character will resume to normal if the player performs a Super Special Move in MAX state).

This time when one character loses a round, the losing team is given a handicap in its favor. In Advanced mode, this means that the player’s stock capacity for Power Gauges is increased by one. In Extra mode, the time it takes to charge one’s power gauge to maximum level is shortened, and the maximum remaining health requirement for a MAX Super Special Move is increased.

when was king of fighters 98 released?

Who developed king of fighters 98?

SNK for the Neo Geo arcade and home consoles in 1998.

Who is the main character of King of Fighters?

The King of Fighters 98 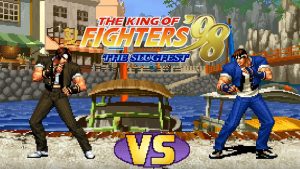 The King of Fighters 98: The Slugfest, is a fighting game released by SNK for the Neo Geo arcade and home consoles in 1998.