Spider Solitaire is a type of patience game, and is one of the more popular two-deck solitaire games. The game originates in 1949, and its name comes from a spider’s eight legs, referencing the eight foundation piles that must be filled to win the game.

The main purpose of the game is to remove all cards from the table, assembling them in the tableau before removing them. Initially, 54 cards are dealt to the tableau in ten piles, face down except for the top cards. The tableau piles build down by rank, and in-suit sequences can be moved together. The 50 remaining cards can be dealt to the tableau ten at a time when none of the piles are empty.

Spider Solitaire was referenced on the February 27, 2021 episode of Saturday Night Live. In the, “So You Think You Can Get the Vaccine,” cold opening sketch 85-year-old contestant, Seymour Forman, (played by Mikey Day) was asked if he was computer literate enough to make an appointment online for a COVID-19 vaccine. After replying “on what?,” Mr. Forman was then asked if he had a computer at home. He replied, “for Spider Solitaire.

What are the rules of Spider Solitaire?

The goal is to assemble 13 cards of a suit, in ascending sequence from ace through king, on top of a pile. Whenever a full suit of 13 cards is so assembled, it is lifted off and discarded from the game. The game is won if all eight suits are played out.

What is spider solitaire 2 suits?

Is a card game that uses two decks of cards. However, 2 Suit Spider Solitaire requires even more skill and concentration because there are two suits of cards involved.

Stack cards of the SAME suit in descending order in the tableau. You will win 2 Suit Spider when all cards are in order and have been eliminated. Click the stock button to add another row of cards to the stacks if you run out of moves. 2 really is more fun than 1!

What is spider solitaire 4 suits?

This strategy game involves all four suits. However, you may stack cards of the same color but differing suits in the tableau. Stack them in descending order to eliminate all the cards in this spider version. If you cannot make any more moves, click the stock button to add another row of cards. But use the button sparingly, because it increases the difficulty of the card game.

What’s the difference between solitaire and spider solitaire?

In regular solitaire your goal is to turn all the face down cards face up.

In spider solitaire, you’re still trying to turn all the cards face up. however, you need to make a column from ace to king. and then you can remove that column from the game and keep playing. 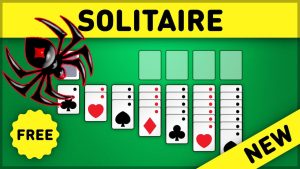 Spider Solitaire is a type of patience game, and is one of the more popular two-deck solitaire games, and originates in 1949.