Super Turbo introduced several new gameplay mechanics not present in previous versions of Street Fighter 2, including the addition of combination moves called super combos and air combos. It also introduced the secret character Akuma, who would go on to become a recurring character in later Street Fighter installments and other Capcom fighting games.

Super Street Fighter 2 Turbo featured several changes and additions to the play mechanics inherited from Super Street Fighter II. The HUD featured new graphics. The original opening sequence and unused sequence, which had featured two generic characters fighting in front of a crowd, was replaced by a new opening featuring lead character Ryu launching a Hadouken projectile towards the screen, now intertwined with images of Chun-Li and Cammy, as well as brief flashes of the image of new hidden character Akuma. New animation frames were drawn for all the victory poses and the basic and special moves of the characters in Super Street Fighter 2 Turbo.

Why is Blanka green?

Blanka’s backstory is that he was once human, but after a plane crash in Brazil he mutated (resulting in his green coloring and his ability to generate electricity).

How do you block in Street Fighter 2 Turbo?

Holding “Back” on your control pad during an enemy attack will make you block. Simply holding “Back” makes you block all overheard and high attacks from opponents and holding “Down-Back” lets you guard while crouching to block low attacks and sweeps.

Which characters are in Super Street Fighter 2 Turbo?

How do you control?

Inset Coin: Shift
Start: Enter
Move: Arrow Keys
Action: Z, X, A, S, Q, E
It is also possible to play with a gamepad
Up to 4 players are supported 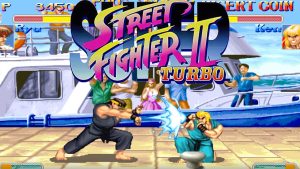 Super Street Fighter 2 Turbo is a fighting game released for the arcades by Capcom in Japan on February 23, 1994, for the CP System II .