The Final Round, (“Hard Puncher: Bloodsoaked Glory”) released in Japan as Hard Puncher, is a boxing arcade game released by Konami in 1988.

A player selects one of two different boxers, and they fight another boxer in a three-round bout. If the player wins, he moves on to the next opponent, climbing the KBA (Konami Boxing Association) rankings along the way. If he loses, he can insert another coin for another chance (rematch). Fights can be won by either knockout, technical knockout or the judges’ decision.

The Final Round Gameplay

When a two-player game is started in The Final Round, both boxers allocate their points and fight against each other. The winner stays, while the loser may get a rematch by inserting another coin. During a normal game, a second player can buy-in and challenge at any time (except during “training sessions”).

Who developed The Final Round?

When was The Final Round released?

On which platform is The Final Round available?

Here’s a good trick that can work against the computer when you’re playing in a one player game. You can get quite far, but it’s a bit boring: press block twice to get your guard up high (covering your face) then waltz over to the opponent and hammer both punch buttons. Wiggling the joystick occasionally will pull off a power move. As long as you punch the opponent constantly until he goes down, he never manages to get up again. 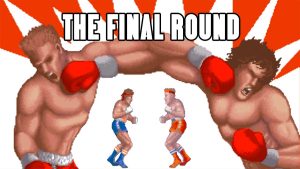 The Final Round, ("Hard Puncher: Bloodsoaked Glory") released in Japan as Hard Puncher, is a boxing arcade game released by Konami in 1988.

The Final Round Video

The Final Round Embed